It Only Takes One. 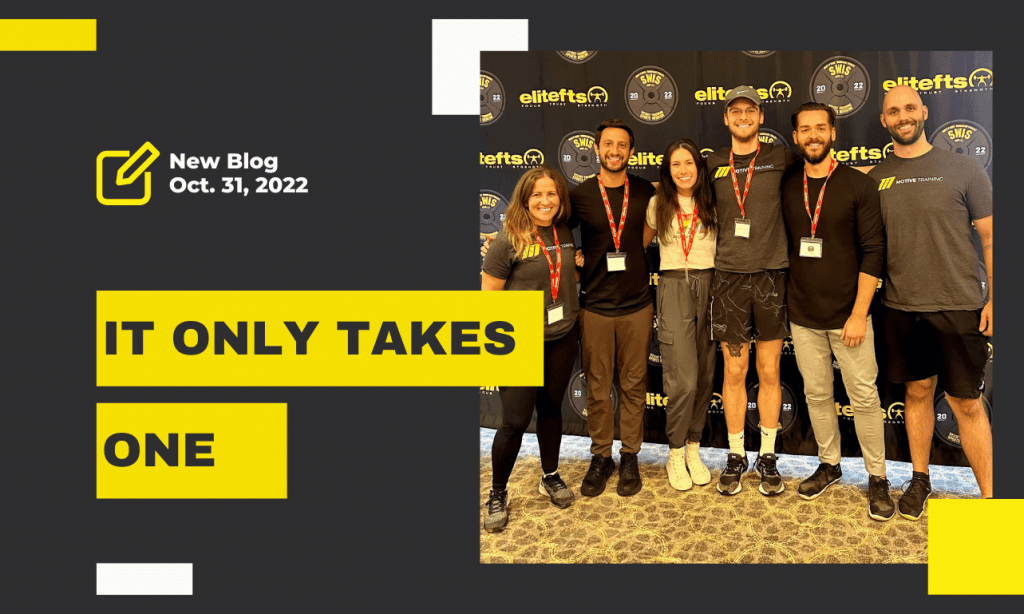 In 2017, I was lucky enough to attend a fitness conference in Seattle. The lineup of presenters was legendary: Martin Rooney, Brett Bartholomew, Mark Fisher, Adam Bornstein, and the list goes on from there. Hundreds of people came from all over the world to learn from the industry’s best. I knew it was going to be epic and that’d I pull a ton of great content from the presenters.

The first day flew by, and I can’t recall any of the talks or presentations off the top of my head. However, I clearly remember sitting in the lobby on lunch break, waiting for an Uber to bring me to a local restaurant for lunch.

While waiting, I struck up a conversation with a guy named Jared, who owned a few Fit Body Boot Camps in Canada. So we decided to carpool together to make life easier. And then, two other guys walked up and got in our car: Andrew Coates and Justin Kavanaugh.

We grabbed lunch, talked shop, and then returned to the conference for part two.

I’ve been to many workshops, seminars, certifications, and conferences all over the country. And I went intending to learn as much as humanly possible. But, unfortunately, what I often didn’t do was intentionally network with people.

Sure, I’d chat about fitness and business ideas with other participants, but I rarely tried to connect with these people past the seminars. However, every so often, I’d hit it off with one or two people, and we’d become long-distance friends on Instagram. That’s how I met one of my close fitness buddies, Andy, from Nashville.

Circling back to 2017: it’s the end of day two. Justin Kavanaugh finds me and hands me a copy of his book, Man Up: The 5 Areas of Focus to Your Athletic Success. Inside is a handwritten note about how cool it was to meet me and that he’d love to continue connecting past the conference.

I thought that was pretty neat but was hurried into my Uber and rode off to the airport.

What I didn’t realize was that Justin (Coach Kav) was intentional in his approach to getting to know me. On some level, Kav sought me out because he knew he could help me, and he was right.

Two days ago, the team at Motive and I went to SWIS in Columbus, Ohio. It’s a fitness event sponsored by elitefts. It was a fun, exhausting event, and the team and I had a blast (probably too much fun).

After the event was over and everyone went home, it dawned on me that I was able to bring an incredible team together to a fantastic event because of Kav.

You see, Kav ended up being the main driver behind Motive Training. Not only did he love my idea, but he helped me manifest it into something worthwhile. Once Motive Training opened in 2019, I met Dan, the now co-owner of Motive, and the rest is history.

One person can make a tremendous impact on your life, and it might positively ripple for years to come if you let it.

I wouldn’t be where I am today without having met Kav.

It only takes one person to make a difference.

So, I’ll see you at SWIS next time.

Want to learn more about what we do? Schedule a free call today. We’ll teach you how to move with purpose, guaranteeing lifelong results. 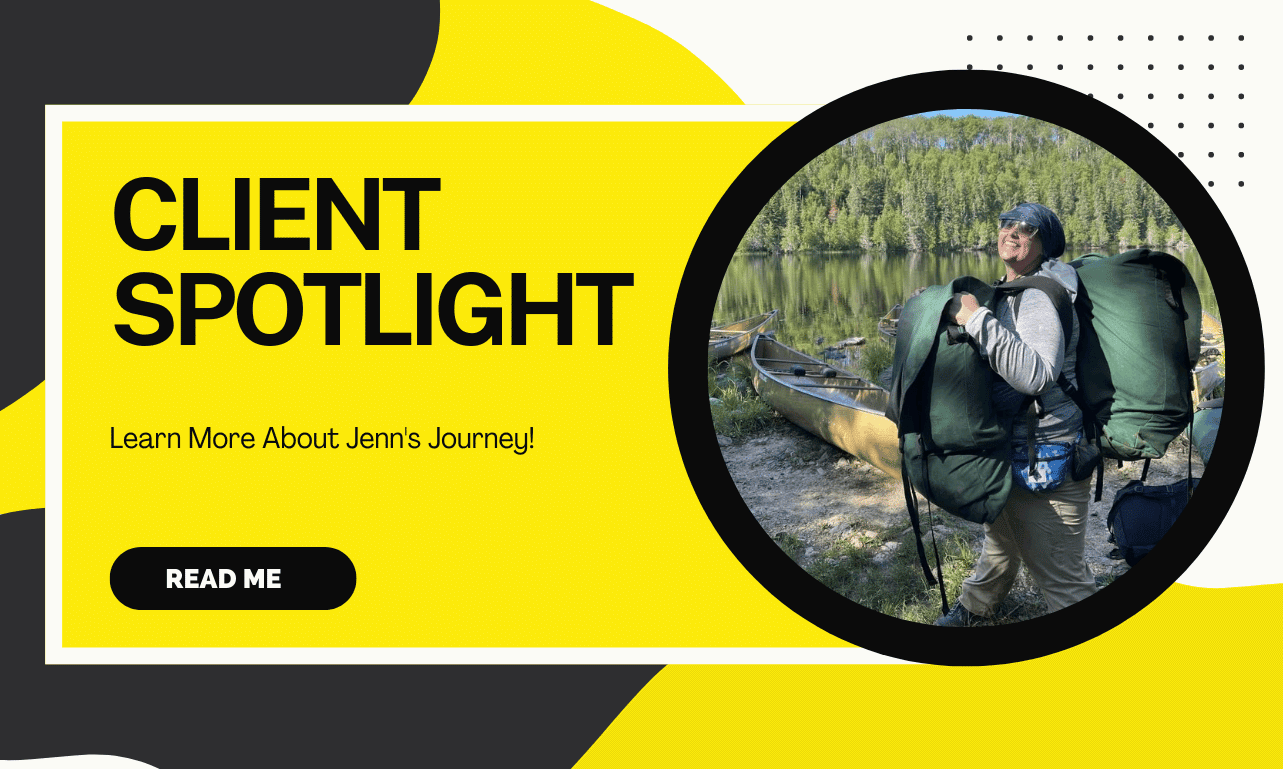 Every month, we will share detailed stories about one of our amazing clients at Motive Training. This month, we want to highlight Jenn V. Jenn 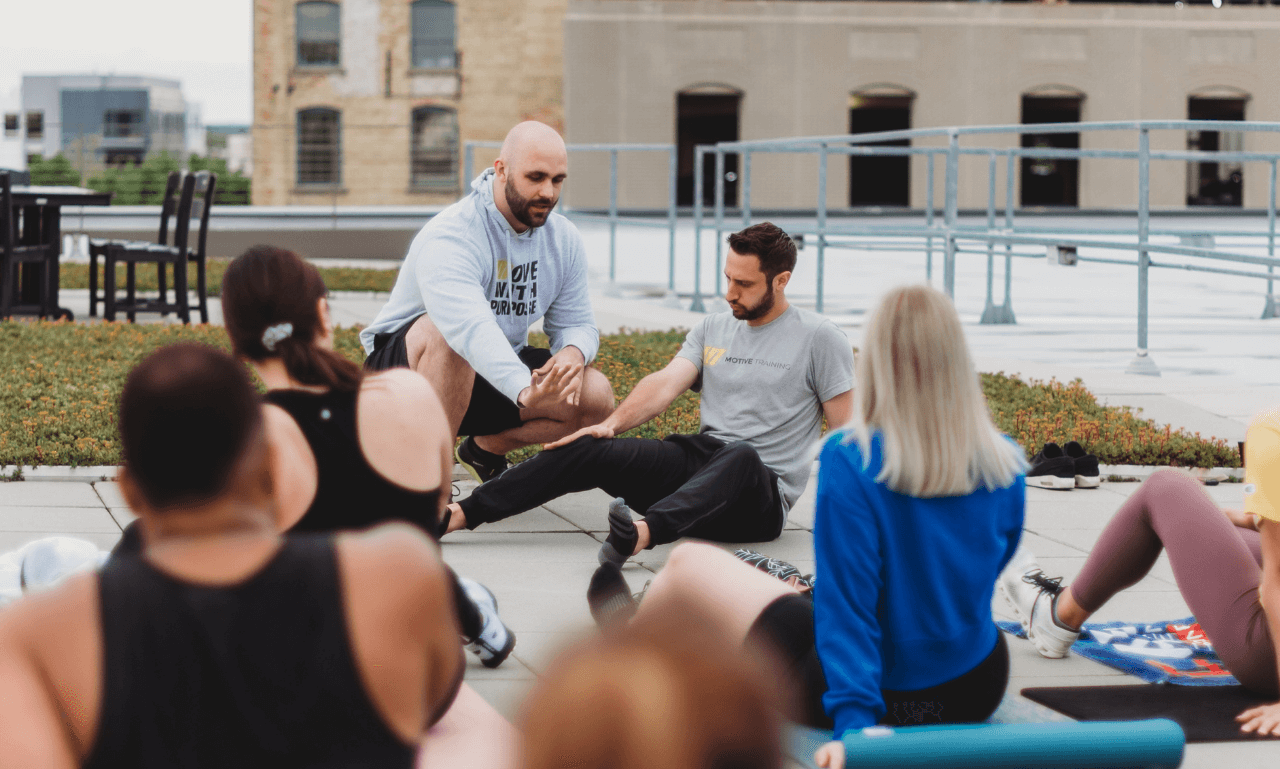 Should You Hire A Personal Trainer?

When I introduce myself to new friends or acquaintances, I tell them I’m a personal trainer. And every single time, like clockwork, they associate my Level Up Your Stretching With PAILs And RAILs

PAILS & RAILS: It’s A mouthful. If you’ve ever been to our gym or done one of our KINSTRETCH classes, you know we do these